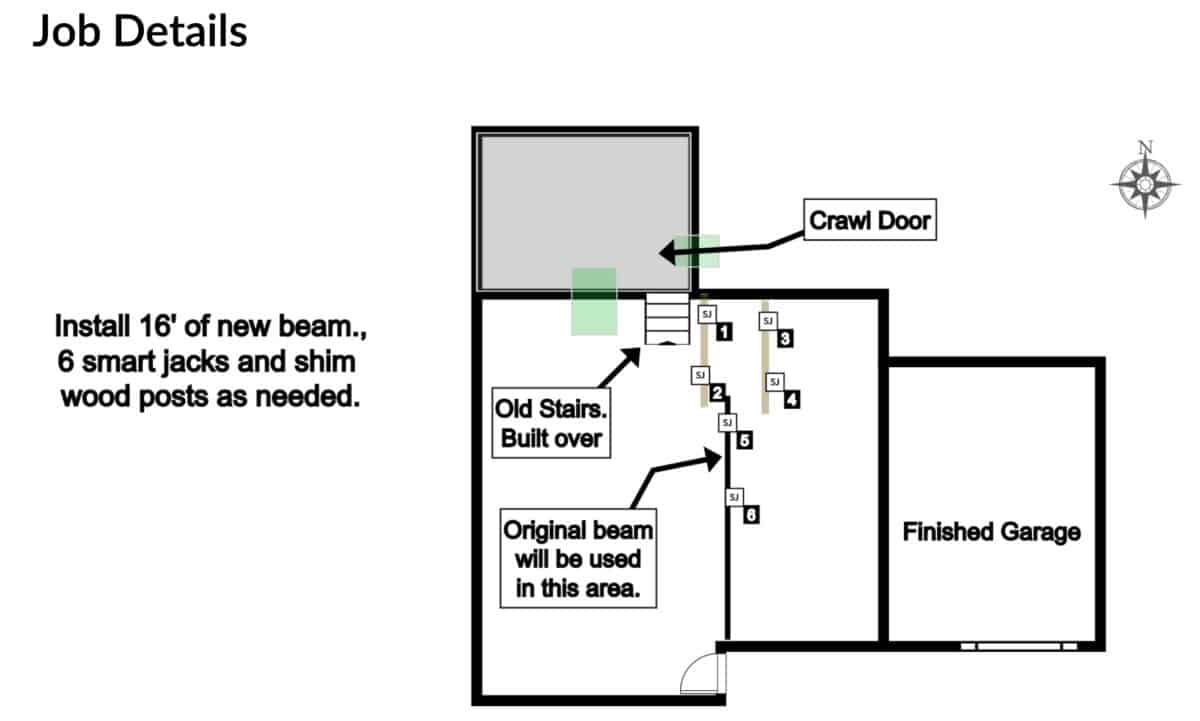 
On February 17th — in the middle of nine days without power due to an ice storm — we had the foundation contractor out to re-inspect our house. We experienced some settling last fall, and I was worried that might indicate deeper problems.

For thirty minutes, the contractor explored the crawlspace while I sat in the living room, fretting. When he finished, he came up to tell me what he’d found.

“Look,” he said, “my assessment is the same as when you had me out here three years ago. Your foundation is fine. It’s not failing. The house isn’t falling down.”

I felt a wave of relief wash over me.

“That said,” he continued, “I do think you’d feel better if you were to reinforce one section of the foundation. It looks to me as if you’re seeing some minor expansion and contraction of the soil, which is what’s causing your settling issues. It’d cost about $9000 to remedy that.”

That evening as Kim and I huddled in our powerless living room, bundled in coats and jackets and using flashlights to read, I made a confession.

“I want to move,” I said. “I know we both love this house and this yard, but it’s taking a toll on my mental health.”

“I know,” Kim said. “I know you’ve been struggling. Ever since we moved in, I’ve seen how you’ve grown increasingly depressed and anxious. I’ll do whatever it takes to make you happy, but I think maybe you should give up on your dream of owning an old house.”

She’s right. I love old houses but my personality isn’t suited for them. They stress me out. (My ex-wife and I owned an old house too — she still lives there — and it caused me endless stress, as well.)

For the next couple of weeks, Kim and I spent many hours discussing our best course of action. Then, one month ago today, we made a decision: We would sell the house as soon as possible (to take advantage of the crazy Portland real-estate market), then rent a place for a while as we made a careful, calculated decision about where to live next.

March was a crazy flurry of activity. From the moment we decided to sell, Kim and I have been working almost non-stop to get the house ready for market.

Honestly, the house looks better now than at any point during which we’ve owned it.

While we prep, we’re torn. We do love this house and yard. The yard, especially, is almost perfect for us. But there’s absolutely no doubt that this home, for whatever reason, causes me mental anguish. I can’t live here.

In fact, I spent the entire first half of March in a deep, dark place. I was filled with anxiety as I ruminated over the house. Whenever it was possible to catastrophize, I catastrophized: “What if the house doesn’t sell? What if the contractors we call in find more things wrong? What if we can’t sell it for what we’ve put into it?”

I was a mess. And it was taking a toll on my relationship with Kim.

Fortunately, the past two weeks have been better, and for a variety of reasons.

First, the contractors who’ve come out have not found more trouble with the house. In fact, they each say similar things: “Yes, this thing I’m fixing is a problem, but it’s not as bad as you think it is, and I don’t see anything else wrong.”

Second, I’ve been trying to practice mindfulness. As new fears surface, I acknowledge them and move on. “Oh yep, there I am stressing about the gutters again. But we’ve fixed the problem out front and the contractor said there’s nothing else wrong, so I’m just stressing over nothing.”

Finally — and perhaps most importantly — just over two weeks ago I began taking my ADHD meds.

When I was diagnosed with ADHD in 2012, my therapist and doctor prescribed Vyvanse, a mild stimulant. I took the stuff briefly, but stopped after a few days because I hated how it made me feel. While there’s no question that it settles my mind, the Vyvanse makes me physically tense. My mind calms, but my body coils like a spring for eight hours. So, I’ve only ever used the stuff occasionally, when I know I have to get stuff done.

Then, Kim and I read this article about ADHD from our friend, David Cain. “David’s article could be about you,” Kim said. She was right. Everything he wrote was as if it were coming from my own mind and my own experience.

At the same time, I read an article that described the connection between ADHD and depression/anxiety. Suddenly everything clicked. “Holy shit,” I thought. “What if my depression and anxiety are exacerbated – or even caused — by the ADHD?”

So, at Kim’s urging (and the urging of my business partner, Tom), I started taking my ADHD meds every day. I’ve been taking them every day for nearly three weeks now. And you know what? The depression and anxiety are (mostly) gone. I’m serious. No, I don’t like the side effects from the Vyvanse, but those side effects may be worth it when I consider the benefits.

I still notice various flaws with the house, but they no longer send me into a mental tailspin. Everything about my mind seems somehow calmer, more organized. My short-term memory has improved markedly. (Both Kim and Kris have long told me that I have a terrible short-term memory. I’m now seeing that this could be tied to the ADHD.)

Plus, as one might expect, the Vyvanse keeps me focused. I’m able to do work like a normal person! I wake in the morning, take my pill, drink my coffee, then I tackle my to-do list, one task at a time. I don’t jump all over the place, moving from one chore to another. I just pick one job and work on it until it’s finished.

As an example, I sat down to write this article about 45 minutes ago. I’ve written continuously without distraction for that entire period of time. More exciting (to me), I’ve written this piece linearly instead of bouncing all over the place from beginning to end to middle to end to beginning to middle to end. I started at the beginning, am now in the middle, and am approaching the end. Writing like this is revelatory!

Our future is murky.

Right now, Kim and I have no idea where we’ll be living a month from now, let alone a year. But we’re okay with that.

If all goes according to plan, our home will be ready to list in about ten days. Like many other parts of the country, Portland has low housing inventory right now and homes are selling quickly — even quirky homes like ours. It’s very possible that the place will sell the first weekend that it’s on the market.

Once we’ve accepted an offer and the home has passed inspection, we’ll look for a place to rent. (This is the one thing that’s causing Kim stress, by the way. She’s worried we won’t find a place that will take all of our beasts: three cats and a dog.) While we rent, we’ll take our time looking for another place to live.

It’s possible we’ll stick around the Portland area, probably in a small town further away from the city. But it’s also possible that we’ll find ourselves settled on the southern Oregon coast. Or maybe somewhere in Washington. Or perhaps in Omaha. (I spend far too much browsing homes on Zillow. You can get smoking deals on nice homes in Omaha. Wouldn’t it be fun to live just a few blocks from Warren Buffett?)

Yesterday, my friend Castle came out with her husband to haul away old fenceboards. (Castle and Jim are artists. They turn old fenceboards into cool crafts that they sell at Portland’s Saturday Market.) They told us about the place they bought a few years ago.

“We live about an hour north of Portland on the Washington side of the river,” Castle told us. “We have a few acres, which gives us a buffer between us and our neighbors. Plus, it gives us room for farming and gardening. We bought a manufactured home, but it’s awesome. It’s so nice and so much cheaper.”

Kim’s eyes lit up. “I love that idea. I could live in a manufactured home,” she said. Then she looked at me. “I don’t know if J.D. could do it, though. He grew up in one. He doesn’t have fond memories of it.”

I shrugged. At this point, I’m not ruling out anything. I grew up in a beat-up mobile home, it’s true, and I’ve long felt like it was a stamp of just how poor we were.

Since then, though, I’ve lived in a standard ranch house. Twice, I’ve lived in quirky old homes with large yards. I spent fifteen months on the road in a motorhome. And for four years, I owned a penthouse condo overlooking the river. I’ve come to realize that a house is just a house. Right now, I feel like I could live almost anywhere — just not here.

This article highlights some of the psychological and emotional reasons for moving. I’m working to prep another article that explores the financial side of the decision.

My life philosophy: 52 lessons from 52 years

Life is not a game

How couples can have constructive conversations about money

The power of non-monetary investments

1012: Should I Create a FREE or PAID Lead Magnet When Starting? Jam…