10 Google Search Statistics You Need to Know in 2022 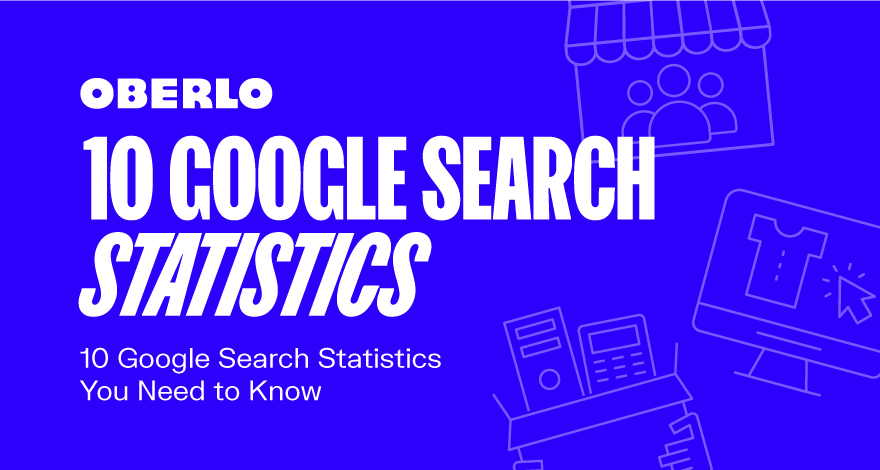 
We’re all constantly curious. That’s why search engines exist: to make our lives easier, and to quench our never-ending thirst for information.

Thanks to search engines, we have an immeasurable amount of information available to us at the touch of a button. It’s hard to imagine how life was like before such easy access to information. So much so, that Google has become synonymous with the internet.

So let’s get started with the top ten Google Search Statistics that you need to know for 2022:

Don’t wait for someone else to do it. Hire yourself and start calling the shots.

It comes as no surprise that Google is the most visited website. To put a number on it, Google was visited 89.3 billion times in the past month alone (Similarweb, 2022).

Every day, billions of users rely on Google to carry out their daily searches. But apart from being a search engine, Google also provides a bunch of other services. This includes Gmail, their popular email service, as well as Google news, Google shopping, and serving as a video and images platform as well.

Another fun fact is that around 16.3 percent of Google’s organic traffic in the US comes from people Googling the term “Google.”

With Google being the most visited website in the world, this next statistic won’t be too surprising for you. Google dominates the search engine market. In fact, as of January 2022, Google holds 91.9 percent of the market share (GS Statcounter, 2022).

Since the introduction of Google search in 1997, all the other search engines have faced quite a hard time trying to reach the same level as Google. Over the past decade, Google has maintained a high market share of the search engine market. And it makes the majority of its revenue through advertising.

But over the course of time, Google has also expanded its services to mail, productivity tools, mobile devices, and other ventures. This combination has also resulted in Google earning one of the highest tech company revenues in 2021.

3. How Many Google Searches Are Conducted per Day?

So, we’ve all been curious about this search statistic. We know that there are a lot of searches carried out on Google every day. But how many is that exactly?

Let’s also take a look at how Google’s searches per year have progressed. In 1998, Google was processing just over 10,000 search queries per day. In comparison, by the end of 2006, the same amount of searches would be processed by Google in a single second. So, in less than a decade, Google went from becoming barely known to an integral part of the everyday life of searchers, all around the world.

According to experts, Google’s success and popularity as a search engine can be credited to its ability to provide quality and relevant results for its users. This is done by analyzing and understanding its users’ search intents and matching them to the websites with the most accurate answers.

As the king of search engines, Google is making it really easy for its users to conduct queries.

Not only are Google searches being done through conventional channels such as desktop and mobile browsers, but users are also exploring newer options such as Google Lens.

Launched in 2017, Google Lens is an app that’s powered by artificial intelligence and machine learning. It helps users identify objects through their smartphone cameras. All they have to do is direct their cameras at the object and ask Google Assistant what it is.

Its features are also constantly getting updated. Just a little over a year after its launch, Google Lens was able to recognize up to a billion different items. With all that it offers, it is certainly proving its appeal. To date, it has been asked more than one billion questions (Google, 2019).

Plus, its search function isn’t limited to just images. Google Lens also helps to translate text—it supports more than 100 languages—and has the ability to read text out loud, the latter of which is particularly useful for users who have difficulty reading small texts.

With mobile gaining popularity almost everywhere, Google search is no exception. Mobile is first even on Google. When we take a look at the number of Google searches based on the device, 63 percent of Google’s US organic search traffic originated from mobile devices (Merkleinc, 2019).

Mobile search refers to Google searches carried out using a mobile device such as a smartphone or a tablet. Since the last quarter of 2013, mobile searches on Google in the United States have increased. When comparing the types of searches on different devices, users on tablets or smartphones are more likely to conduct local searches, looking for answers to a particular query that is more likely to be location based. Searches carried out using mobile devices are typically done with less complex results in mind, which could include fast facts, rather than learning complex subjects.

6. What Is the Most Searched Query on Google?

7. How Often Do We Use Google Search?

Without even taking a look at this stat, we know that we’re really dependant on Google. Multiple times per day, we’re turning to Google to resolve our queries for us. To be precise, 84 percent of respondents use Google 3+ times a day or more often (Moz, 2019).

Google search has seen many changes in the past few years. Google has also introduced many new components to the normal search results that we were getting around a decade ago. With the updates, many quick searches are answered even faster thanks to Featured Snippets, or Knowledge Panels. We get better results for what we might be searching for in terms of videos or images, where this might’ve been the preferred choice of searchers in the first place. Taking it a step further, Google also introduced the “People Also Ask” boxes, which help searchers dig further into their original query by showing them further questions that might be relevant to them.

8. Almost Half of All Product Searches Begin on Google

This can also be really useful for marketers that are trying to understand the buyer journey and how they can make the lives of their customers easier. Knowing where product searches start from can help marketers know their potential impact throughout the different stages of the customer buyer journey. Whether marketers are trying to rank organically or run effective Google ads, this can be useful to make sure that they’re providing the right information to searchers to help them make the right purchase decision.

9. Importance of the First SERP Page

If you’re looking for something on Google, chances are you’re going to stay on the first page. In fact, 90 percent of survey respondents said they were likely to click on the first set of results (Searchengineland, 2018). Chances are, if you can’t find your desired results on the first page, you’ll end up changing your query, instead of looking at the second page.

The same survey also revealed that 60 percent of mobile users were “very likely” to click on the first two or three search results they saw. This increasingly lays emphasis on the fact that organic rankings matter. The most important reason you want to rank higher is to increase your visibility to users. Especially if you’re a business, you should strive to be on the first page of Google SERPs. You drastically reduce your visibility by going beyond page one of Google.

Organic search produced 23 percent of all site visits in Q2 2019 (Merkle, 2019). The report shows us that organic search fell by percent year-over-year in Q2 2019. Organic search visits were down across all devices, but this trend was the most visible on mobile phones.

The main reason for this drop in organic searches’ could be because of a growth in paid search and direct site visits. This doesn’t mean that organic search results are no longer important, but that other sources are gaining visibility. The main reason why organic results will remain your best friend is that organic traffic is targeted. If you cater your results to provide a solution to a specific user query, chances are that you’ll be more likely to gain a new customer.

It’s clear that Google continues to dominate the search market overwhelmingly. But that doesn’t mean that other search engines should be ignored. Search engines like Bing, Baidu, and others continue to gain importance. That’s why it’s important for marketers to keep other search engines in mind to be able to target niche audiences. Not just that, but platforms such as Facebook and Amazon have also maintained their growth over the years. Understanding Google’s search trends can open doors of possibility for marketers to improve their CTRs and conversion rates.

Do you think we’ve covered all your favorite Google search statistics? Or did we miss something? Let us know in the comments below.

What is a POS system and Why Do You Need One

How Travis Jamison Went from Successful Exit to Investing.io Community

One of The Best New AI-Powered Writers in 2022?